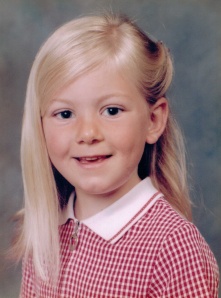 Adam Levielle ran his second 10K Grand East Anglia Run for Anna’s Hope on 7th May in memory of his beautiful daughter Maddie. She was diagnosed with a brain tumour on the brain stem in 2004 March and sadly died on 27th May 2004 with mummy and daddy Julie and Adam by her side.

Maddie is still very much in  Julie and Adam’s  hearts and thoughts and Anna’s Hope really appreciate  Adam’s fund raising efforts. Adam raised £436 in this year’s event and £336 last year. Every penny will go towards funding the charity’s aims.

Well done Adam and thank you for your continued support. 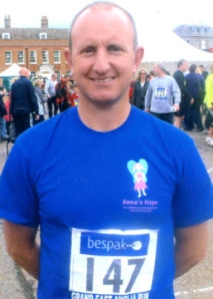 Congratulations Adam and thank you for your fundraising efforts! 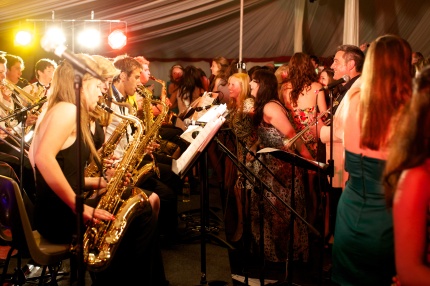 Tickets (£14 all seats reserved) can be purchased from 9am Thursday 26 April only by phoning 01572 758820 or coming to the Box Office, Queen Elizabeth Theatre, Ashwell Road, Oakham.

Don’t miss this fab evening of music and fun with Oakham School’s top student jazz musicians and singers! This year, we’ve a fantastic new Funky Tents marquee to add an extra glitz to the evening. Enjoy the music from your table, bring a picnic to eat during the interval and get your drinks from the bar, which is open all evening.

Oakham School’s Big Band Bonanza is delighted to be associated with Anna’s Hope again this year – look out for Carole and her fairies taking a retiring collection!

Seats/tables will be reserved for you at the time of booking. Tables seat 10 only. The management reserves the right to place you at a table. Payment for phone orders must be received within 7 working days or tickets will be re-allocated. Tickets bought in person must be paid for at the time of purchase. Further restrictions apply.

A big thank you to the 2nd Stamford Town Scouts who raised £55 in a Sponsored silence at night in Burghley Park. What brave scouts you all are. 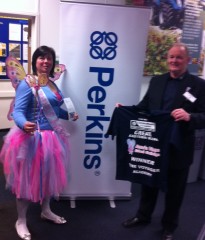 Chroma Sports And Trophies donate team sports kit worth over £500 in this year’s Junior Challenge.

Carole, pictured with great friend of Anna’s Hope Micky Vincent from Chroma Sports and Trophies, who once again will generously donate a team sports kit worth £500 to the school or club who raise the most money for Anna’s Hope  in the Junior Challenge. 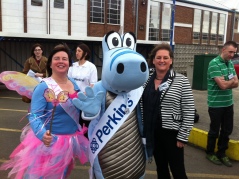 We are pleased to announce that Robin Cousins has become a friend and lifelong supporter of Anna’s Hope . Robin kindly said:
“After supporting Anna’s Hope for a few years with Holiday on Ice it was lovely to be able to to join Carole and her husband at Addenbrookes Hospital.
Meeting the dedicated Anna’s Hope nurse and some of the family’s who are benefitting from this wonderful charity was very special and it is heartening to know that from one families grief others can take comfort and as long as Carole is around in her fairy outfit, people will know Anna’s Hope is there for them. I am delighted to be a friend and lifelong supporter of Anna’s Hope.” 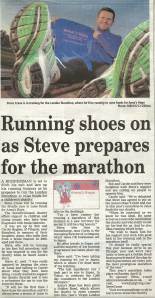 Also featured in the Stamford Mercury, local businessman Steve Crane will be running the London Marathon in aid of Anna’s Hope. It’s Steve’s first Marathon, so we wish him all the best – his work takes him on regular trips to Japan so most of his training has been done out there!

As featured in the Stamford Mercury… with grateful thanks to students at the New College, Stamford, who rasied £300 by organising a number of fun sporting events.

If you’re heading to Belton Horse Trials on March 30th – April 1st, come and have your face painted – all in aid of Anna’s Hope!

It’s a great day out – in additional to the main horse event, there are food stalls, dog agility, craft markets, ferret racing and a classic car display – plus lots more!

Warners (a publishing company based in Bourne), Business Control Solutions (an IT company in Peterborough) and The Factory Shop (a discount store in Market Deeping) have all selected Anna’s Hope to be their Charity Of The Year. Thank you for the support – much appreciated!

The time has come around yet again for Our 6th Anna’s Hope Charity Fairy Ball will take place at the Haycock Hotel, Wansford on Saturday May 12th 2012.
We would be delighted if you and your friends would like to  support Anna’s Hope by taking a table of 10  at the ball, which has become the event to come to in many peoples social dairies.
To book your table and a night to remember, can you please contact  Carole at the address or e-mail below  – limited tables left so do hurry!
admin@annashope.co.uk   or  Hunters Hill, Lattimers Paddock, Pilsgate, Stamford. Lincs PE9 3HL
01780 740492

The ball is now sold out. Sorry, please try again next year and we hope that you will be able to come and support us then.

‘This year’s Holiday on Ice show ‘Tropicana’, at the Peterborough Exec, was a great success,’ said Carole Hughes from Anna’s Hope. ‘It was a fantastic show with wonderful world class skating set to the music from Barry Manilow. Once again thanks to the generous support from Holiday on Ice , Anna’s Hope was able to provide local children who have a brain tumour and their families with a fun night out and a break from their treatment. It is special that through our continued connection with Holiday on Ice we are able to do this. Feedback from the children and their parents makes it all worthwhile. This year lots of the children dressed up in fairy dresses and got their photograph taken with Olympic Gold medal Ice Skater and Dancing on Ice Judge Robin Cousins. We are proud to say Robin is a friend and a life long supporter of Anna’s Hope. He took time out of his busy schedule last year to visit Addenbrookes with me to meet some of the children on the ward and has a lovely caring rapport with the children and their parents.’

‘The event was a great fundraising success. Robin presented the charity with a cheque for £1000 from Holiday on Ice and an amazing £4000 was collected by the Anna’s Hope Fairies from the generous public. On behalf of Anna’s Hope I want to express my thanks to Holiday on Ice, all those who visited the show and the volunteers who braved the snow to help me. Every penny raised will go directly towards funding the charities aims.’

Anna’s Hope and Holiday On Ice were featured in the Stamford Mercury, Peterborough Evening Telegraph, Harborough Mail, and ESP Magazine

We are pleased to announce that Robin Cousins has become a friend and lifelong supporter of Anna’s Hope . Robin kindly said:
“After supporting Anna’s Hope for a few years with Holiday on Ice it was lovely to be able to to join Carole and her husband at Addenbrookes Hospital.
Meeting the dedicated Anna’s Hope nurse and some of the family’s who are benefitting from this wonderful charity was very special and it is heartening to know that from one families grief others can take comfort and as long as Carole is around in her fairy outfit, people will know Anna’s Hope is there for them. I am delighted to be a friend and lifelong supporter of Anna’s Hope.”

Carole put on her Fairy Dress for the last time in 2011 and joined Santa Claus and his elves in Santas Grotto at Kiddicare, Peterborough. £270 was kindly donated by the customers. Thanks to all the staff at Kiddicare for supporting Anna’s Hope!

Rob Forster from Stamford Boys school raised £200 from sales in the tuck shop with the help of Joseph Chedd and William Bourne. Anna’s Hope founder and Anna’s mummy was delighted to receive the cheque from the boys when she visited the school.

Rob is a keen supporter of the charity and this is the second time he has raised funds for Anna’s Hope through the Tuck Shop. 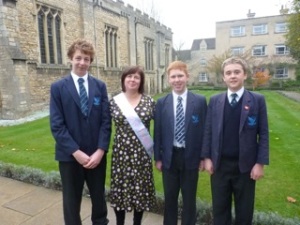 Thank You, Rob, Joseph and William and all those who bought from the Tuck shop. Every penny will go towards funding the charity’s aims.

We are proud to support 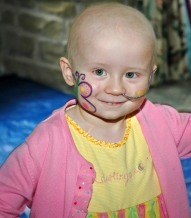 The Leading Children's Brain Tumour Charity in the East Of England

Anna's Hope is dedicated to giving hope to children and young people diagnosed with a brain tumour. It was inspired by Anna Olivia Hughes, who tragically died from a brain tumour aged only 3 years and 8 months, and was set up by Anna's parents Rob and Carole Hughes and her five Godparents in October 2006.

To make a difference to the lives of children and young people who have a brain tumour by providing support and rehabilitation during and after treatment to help them reach their full potential.